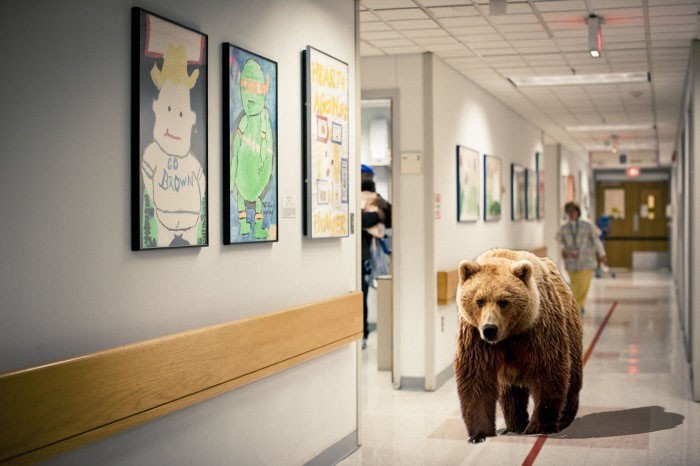 Last year, administrators from Westchester Medical Center observed how pet therapy with dogs at nearby Blythedale Children’s Hospital was helping children cope with their illness, bring some joy into their hospital stay, which led to more pleasant experiences and even quicker recovery times.  It didn’t take long for them to champion and implement a parallel program to help with hospitalized adults. Though Westchester Medical Center is only a few months into the project, hospital administrators are very optimistic about its potential.

According to Piccadilly, hospital staff and patients have been unanimously supportive of the new pet therapy program.

“HE’S OUT OF HIS DAMN [EXPLETIVE] MIND!!!!!” wrote an anonymous patient on a torn and bloodied comment card.

“MY ARM!!!! OWWWWW, HE’S BITING MY ARM OFF!!!!!” third-year surgical resident Javier Rodriguez screamed in tremendous pain, tears streaming from his face.  “WHAT KIND OF PLACE IS THIS???? HELP!!!!”

The first black bear (Ursus americanus) brought into the pet therapy program was Brutus, introduced in March 2014.  Transported from Kenai National Park in Alaska, the 520 lb. Brutus is well-known to the hospital staff.  Per Piccadilly, Brutus the Black Bear is ready to put smiles on everyone’s faces when dressed in his volunteer vest, cute yellow hat, and badge.

“I was going to have surgery and I was scared.  I haven’t had surgery before,” whispered a trembling patient Mary Walters, lying underneath her heavily-clawed bed.  “But once I met Brutus… Oh my, I was BEYOND terrified… surgery was a piece of cake… OH NO, BRUTUS IS BACK, CALL SOMEONE!!!!! GET ME OUT OF HERE!!!!!”

Brutus is one of ten black bears roaming the wards at Westchester Medical Center.  The first grizzly (Ursus horribilis) to join the pet therapy program was Gore, when he joined last month from Yellowstone National Park.  Gore the Grizzly is 790 lbs. of furry fun joy.  He has already made a huge impact, touching and affecting the lives of numerous patients and staff since he joined.

“HE’S KILLED THEM ALL!” said a phlebotomist hiding in the Unit 8G linen closet and praying with a rosary in hand.  “Gore preys on everything.  EVERYTHING!  Has this place gone MAD?!”

Hospital administrators cite numerous studies in the pediatric literature that have shown decreased anxiety and shorter recovery times with the use of pet therapy.  For some patients, playing with the animals is a nice, fun distraction.

“Shhhhhh, not now, there’s a grizzly,” said internist Ken Thomas, making rounds in the hospital’s grizzly territory, Unit 3B.  “When playing dead, it’s best to lie on your stomach, vital organs to the ground, and cover your neck with your arms and hands.  But if it fights, you’ve got no choice but to fight back!”  He added: “Never round on patients here without packing your bear spray.” 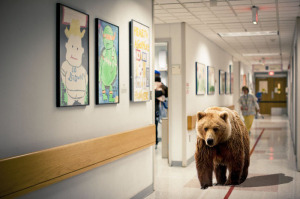 For other patients, animals are trustworthy companions and can help them deal with their fears and loneliness while recovering in the hospital.

“I HATE BEARS!!!!  LEAVE ME ALONE!!!!” exclaimed heart failure patient Michael Jones, whose chest pressure worsened and telemetry monitor noted tachycardia to the 150s.  “I CAN’T BELIEVE I’M GOING TO DIE LIKE THIS!!!! WHY MEEEE???!!!”

However, Piccadilly was quick to dismiss those concerns.

“Look, we’re still very early in the process,” Piccadilly noted as he stepped over a mangled physician’s carcass.  “Sure, bears have increased in numbers and bear trauma has increased.  But we can’t prove causality.  This is a classic example of true, true, unrelated.”

If all continues to go well, Piccadilly hopes to introduce Cain the Cheetah to the cancer ward by January 2015.