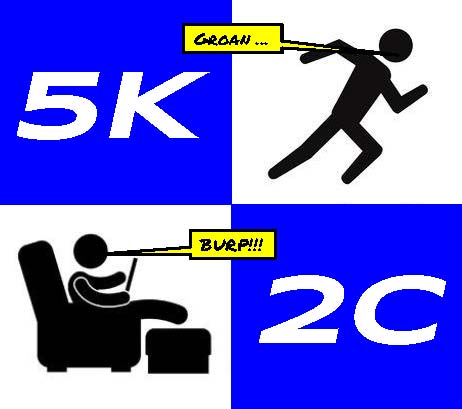 BIRMINGHAM, AL – Swimming in a large sea of running apps helping to get people active and create runners out of previous non-runners is a lone game-changing app that is slowly gaining momentum and, in doing so, slowing down everyone else’s.  The app is called 5K-to-Couch or 5K2C.  What is the goal of the app?  To quickly transition you from an active, healthy 5-kilometer (5K) runner to a lazy, apneic couch bum (0K) and help you in the fight for obesity. 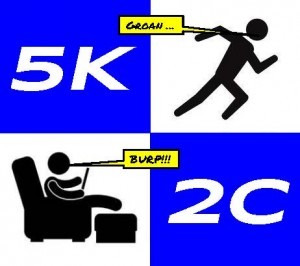 The maker of the app explains.

“I think consumers are overwhelmed by all the running apps, as if that’s their only choice out there,” explains Birmingham resident, 5K2C creator, and avid non-runner Jim Reynolds while gargling a 2-liter bottle of Coke to wash away any remnants of a McRib.  “What if people hate to run or want to quit running?  That segment of the market has been totally ignored and that needed to change.  Can you pass the mozzarella sticks?”

“I used to be so healthy,” explains 5K2C user Tara Roberts, her comments occasionally drowned out by the crunching of Cheetos.  “It was terrible.  I used to run tons of 5Ks and I used to be so skinny and I’d have these occasional post-run leg aches.  But now the legs are no longer aching; they’ve atrophied.  My skinniness has been cured, and I’ve realized how much time I’ve wasted outside all these years.  What am I running away from?  I faced my fears and it feels so great to catch up on The Hunger Games, Orange is the New Black, and Game of Thrones.”

Marketed as an anti-running app, 5K2C works similar to running apps but applies the principles in reverse with the goal of going from running a full 5K to no running at all.  In two short weeks, the program decreases your fitness by alternating running, walking, and sitting, no more than three times a week, until eventually you are sicker, weaker, and more lethargic than ever.

The audio coach in the app will tell you when to run, walk, nap, check email, snore, or snack.  The app removes all motivation.  If you are running too fast or too much, the audio coach will tell you to “Slow down!” or say “Easy there, easy!”  The app is also social-media friendly, allowing you to share your lack of achievements on Facebook and Twitter.  It works great with all music apps, Doritos, and buffalo wings.

In less than a year, the 5K2C app has affected over 2 million people, giving them the gifts of obesity, heart disease, hypertension, diabetes, and sleep apnea.

Given the tremendous success of the 5K2C app, Reynolds and his inactive creative team are hoping to release sister apps this winter, the names of which include: 10K2C (10K-to-Couch), 5K2B (5K-to-Bed), and for the truly uninspired, C2B (Couch-to-Bed).

“We are really, really excited about the C2B app,” says Reynolds as he lets out a huge yawn and plays an episode of Say Yes to the Dress.  “We added several new features.  We alternate social interaction with no social interaction until completely isolated from all friends and loved ones.  We transition you from enduring long hours of television to enduring long hours of bedtime.  We’re aiming for complete inactivity.  It’s as close to being dead without actually being dead.  It’s amazing.”

Reynolds and his bedbound team advise potential 5K2C app users not to consult their medical provider before starting any physical inactivity.

The 5K2C app is free and available for download on all Apple and Android devices.  Non-invasive positive pressure ventilation sold separately.