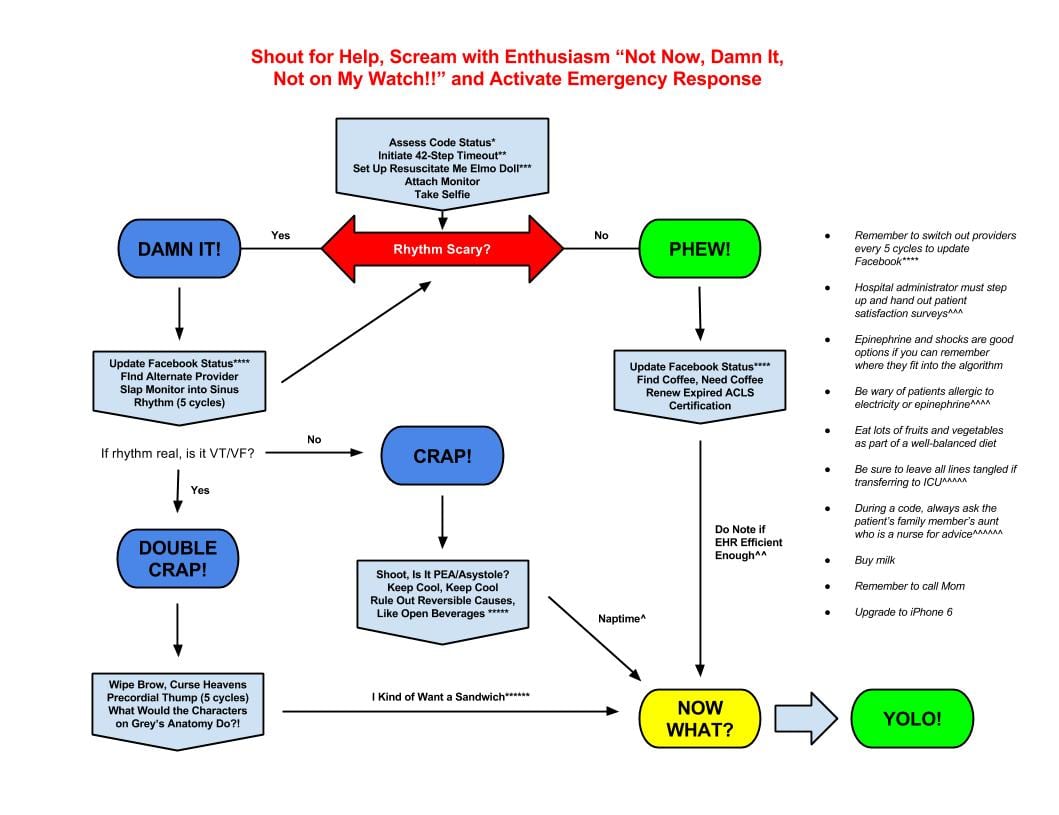 HAYWARD, CA – FINALLY!  The Rock… HAS COME BACK… to cardiopulmonary resuscitation (CPR)!  A new study in the New England Journal of Sports Entertainment (NEJSE) has confirmed something that we knew all along: The People’s Elbow is the most electrifying move in all of advanced cardiac life support (ACLS), including CPR.

We approached the lead researcher, The Rock.

“Who in the BLUE HELL are you?” asked The Rock.  Before we could reply, he interrupted: “IT DOESN’T MATTER what your name is, JABRONI.  The millions… (and millions…) and millions of The Rock’s fans know what is the greatest move in resuscitation!  And nobody, and The Rock means NOBODY, wants to hear about defibrillators or precordial thumps.  The Rock will take his size fourteen boot and kick that rudy-poo life-threatening arrhythmia’s candy-ass!   So next time you find a man down?  The Rock says this: Just bring it!”

The People’s Elbow involves an intricate series of maneuvers.  If a patient is found down inside a ring, stand over the patient’s head and kick his or her arms to the side.  With your left hand, take your right elbow pad off slowly and fling it to the spectators in front of you.  Wave your arms in and out across your body twice before running to the left, bouncing off the ropes, running over your patient, and bouncing off the ropes on the right.

Generate momentum by swinging your right leg out and drop a vicious flexed elbow onto the patient’s sternum.  When executed both properly and monophasically, The People’s Elbow can deliver 360 joules, sufficient to shock disorganized cardiac activity back into normal sinus rhythm with return of spontaneous circulation, all the while drawing the deafening chants of “ROCKY, ROCKY, ROCKY!!!”

“The People’s Elbow is the only finishing move that can effectively restore life out in the field, and it certainly is the most electric,” observed The People’s Cardiologist Ryan Schultz.  “The literature has shown no such luck with the Stone Cold Stunner, Chokeslam, Sweet Chin Music, RKO, Tombstone Piledriver, or F5.”

We showed The Rock an electrocardiogram (ECG) with ventricular fibrillation.  He grabbed the ECG and shouted at it angrily, “You want to go one on one with The Great One?!  The Rock will take you down Know-Your-Role Boulevard, which is on the corner of Jabroni Drive, and check you directly into the Smackdown Hotel!  Now shut your mouth and know your roll!”

The Rock climbed on top of a nearby nurses station, raising his right arm triumphantly while tilting his nose upward.  He happened to have a microphone handy.  “If YA SMELL-LALALALALALALLALALA-OWWWWWW what The Rock…. is cooking.”