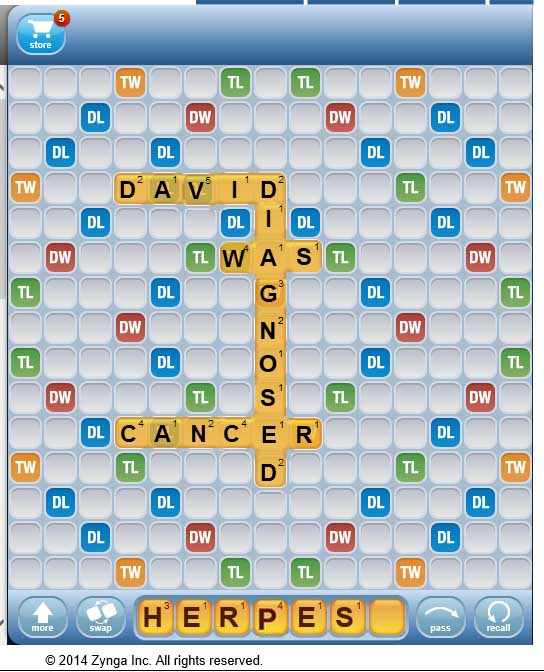 The popular mobile game, Words With Friends, just added HIPAA compliant secure messaging.  Spokesperson Gene Catterspolti said, “It was a highly requested feature as many physicians play WWF on rounds, on call, in the OR, and while at family gatherings.”  The new physicians-only module features the ability to text private patient information and images that are fully compliant with federal guidelines, making it the only fully HIPAA-compliant method of electronically transmitting this kind of information between doctors.

St. Ignatius Medical Center IT administrator, Jan Higgenbottom states, “The only truly HIPAA-compliant method of communicating between physicians is whispering in their respective ears while spooning nude in a hot tub with the jets running.  We know from revelations about data security that traditional texting, paging, Facetiming, and even phone calling does not comply, until today.  What is even cooler is the quadruple-point bonus if you play the patient information in the game!”

“Detractors were numerous,” said Dr. Marsha MacGibbon, an anesthesiologist who loves playing WWF.  “Who is going to be able to play ‘ketoacidosis’ and ‘Mrs. Hamilton’ in the same game?  It would be much better if Candy Crush did this with patients and organ-shaped candy.”