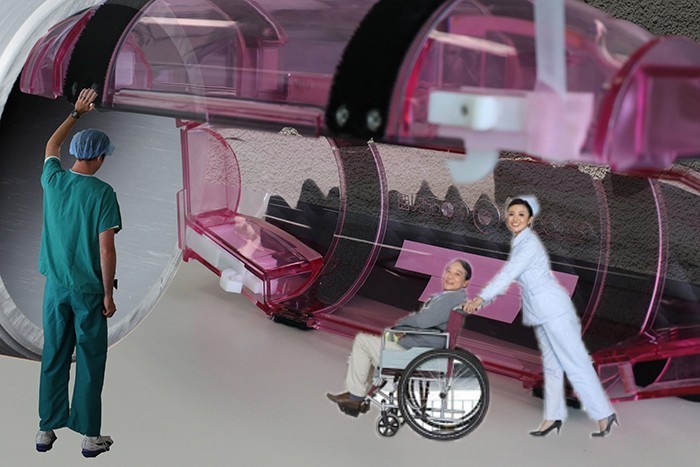 ROCHESTER, MN – One month into its experimental trial run, the Mayo Clinic made an announcement today that the implementation of a pneumatic tube system for patient transport has been achieved with great success.

Mayo clinic teamed up with manufacturer of pneumatic tube systems, Pevco, last year to bring the idea to fruition.  The Mayo Clinic becomes the first hospital in the world to successfully transport patients primarily by pneumatic tubing.

“Creating the patient tube system was actually pretty easy,” explains Mark Williams, a spokesperson for Pevco.  “We basically took our current tube system that we use for labs and drugs, and scaled it up to human proportions.  A few jet engines later, we got it.”

How does it work?

Patients are loosely stuffed into questionably-padded containers called carriers.  Through the use of positive pressure, vacuums, an intricate network of tubing, and some luck, patients are moved to and from different parts of the hospital, such as the emergency room, radiology, intensive care units, and cafeteria.

Patients can be shipped at a speed of nearly 50 miles per hour independent of admitting or discharge diagnoses.  Patient arrival is signaled by a loud thunderous thump generated when the carrier crashes into the target destination’s uncushioned receptacle.  Under optimal conditions, the arriving carrier can be ignored for up to 6 hours if the patient looks like they will be a lot of work to take care of.

A huge majority of health care workers at the Mayo Clinic have praised the new transport system, citing improved patient flow and elimination of human error, often the Achilles heel of human-based transport systems.  In addition, freeing workers from transport duties has allowed for hospital leadership to promptly fire them.

“It’s incredible to say the least,” says Mayo Clinic intensivist Dr. Ricky Blalock.  “The ER sent us a patient in septic shock, got here in no time.  Patient slammed onto the floor, chart, clothing, ventilator, pressors were all in there!  I mean the IV lines were tangled, but that happens normally anyways.”

Even patients enjoyed the new set up.

The patient tubing system has worked well in its early stages, but its performance has not been flawless.

“I tried to send a patient for an upper GI series,” commented Mayo Clinic general surgeon Steven Gilbert, shaking his head.  “That was three days ago.”

“I’ve learned my lesson,” explains hospitalist David James, who has physically lost three patients thus far, including one jettisoned towards the international space station (ISS).  “Like my CSF samples, I walk my patients down.  Otherwise they’re in outer space, middle earth, you name it.”

Similar to traditional tube systems, carriers with patients are occasionally lost and never found.  Fourteen patients have been lost to date.  Industrial doses of Drano have failed and lubricated rescue teams have gone missing as well.  Because of this new form of iatrogenesis, a few providers have said, “No, thanks” to the patient tubing system.

The Mayo Clinic and Pevco hope to iron out this small issue of misplaced patients over the next few months though both state that losing patients is nothing new to health care.  But if the system is perfected down the road, they envision a day where interhospital transport can be performed with pneumatic tubes, perhaps eliminating the need of ambulances and life flights.  Several major health care institutions are excited about the potential and are preparing for future installation of patient pneumatic tubes by soundproofing rooms that may contain carrier receptacles.