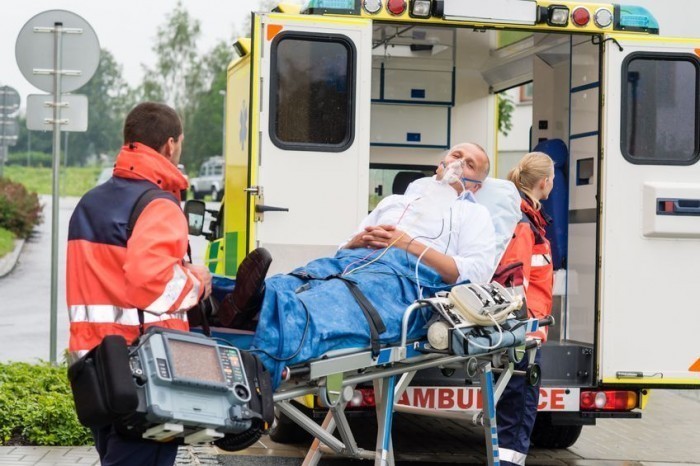 “Wow, I don’t know what to say,” said internist Christopher Johnson, scratching his head, clearly disappointed.  “We just forgot, simple as that.”

“We knew something wasn’t right, but none of us could put our fingers on it,” said charge nurse Michelle Carter, standing next to Johnson and the rest of the disappointed medical team.  All are clearly baffled by the oversight.  “This will be a good learning experience.”

At approximately 9 AM this morning, all members of Berman’s multidisciplinary inpatient medical team were present at bedside to wish him and his family well after a prolonged hospitalization: his nurse, charge nurse, student nurse, tech, social worker, physical therapist, occupational therapist, speech therapist, medical students, intern, resident, attending, nutritionist, palliative care team, and numerous subspecialists including gastroenterology and infectious diseases.  Despite everyone being present at bedside, no one on the team noticed he still had numerous tubes and wires inserted into and coming out of his body and was physically tethered down to the bed.

“I think we all got lost in the excitement of getting him home to his family today,” explained social worker Calvin Lewis, hands on his hips.  “You know when you see someone, they look different, but you can’t quite pinpoint it until they tell you it’s their new haircut, and then it’s obvious?  That’s exactly what happened here.  He had this look when he was wheeled out to go home.  Of course.”

Two weeks ago, Berman came in complaining of abdominal pain, nausea, vomiting, and diarrhea; he was found to have septic shock due to severe C. difficile colitis.  His hospital course was complicated by acute kidney injury, anemia, atrial fibrillation, delirium, and malnutrition.  Though his recovery was slow, Berman battled and battled and eventually recovered to the point where all members of his medical team deemed him medically stable for discharge home today.

“There are lots of checks and balances in the system,” said palliative care nurse practitioner Cynthia Rodgers.  She lets out a huge sigh.  “I guess we all just happened to forget about the tele and the Foley and the rectal tube and the restraints and the lines and every other invasive thing.  But at least he got his prescriptions, right?”

Berman did not get his prescriptions.

Unfortunately, Berman’s team forgot to provide numerous prescriptions, including several antibiotics and cardiac medications.  However, they were able to dole out a thirty-day supply of calcium, vitamin D, and multivitamins.

“Sometimes I wonder in all the madness to document everything and practice defensive medicine while taking care of so many acutely-ill and complicated patients, details get lost in all the jargon, in all the confusion,” joked intern Samantha White who has seen this all too often in her young medical career.  “But what do I know?  I’m just an intern.”

Berman remains appreciative and awaits transport back to the hospital.

“Like my team of providers, I was just so stoked to be able to leave,” explained Berman from his home, still in his original hospital bed, his entire body hidden behind a complex spider web of restraints, tubes, wires, and lines.  “It only really dawned on me and my wife a few hours after I got home that I still had all this stuff on me.”  He gestures at his cocoon of catheters and laughs at his ridiculous predicament.  “It’s a good thing you can’t get complications from these things otherwise this is a set up for disaster!”