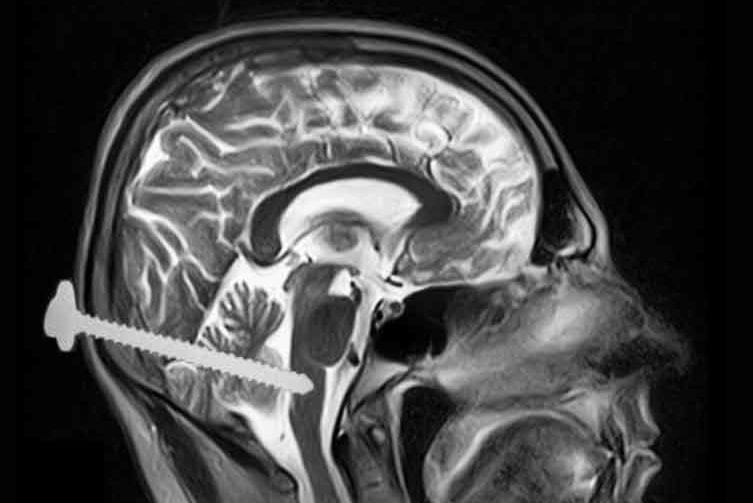 ANN ARBOR, MI – Expanding the possibilities of what can be done in the subspecialty of orthopedic surgery, orthopod Brock Hammersley has placed an intramedullary nail (IMN) into his patient’s medulla oblongata in order to stabilize it against the pons and skull.

“Normally this type of surgery would fall into Neurosurgery’s territory,” explained Hammersley, “but the skull is a bone and an intramedullary nail contains the word ‘medulla.’  In my mind, this is the next evolution of orthopedic surgery: hammering a nail directly into our patient’s brains.”

In the mind of patient Rob Myers is a long nail embedded into his cardiac and respiratory centers, thanks to the finesse of Dr. Hammersley, who took a direct posterior route to the brainstem by hammering the nail straight through the cerebellum.  If this had failed, he would have tried again, inserting it “from the top” and piercing the cerebrum, midbrain, and pons en route to the medulla oblongata.

“The crazy part is that I wasn’t having any symptoms but Brock insisted that I have the surgery, that I’d be famous for it,” said Myers, who can’t figure out why he’s so unsteady all of a sudden.  “He challenged me to an arm-wrestling match and if I lost I had to have the surgery.  Obviously he won; the man’s undefeated.”

Nurses have told Hammersley that Myers’ vital signs have been unstable, but he didn’t seem fazed.  “Those are medical problems, time to get the hospitalist on board,” he remarked.  “It’s not a surgical complication though.”

“Hey Brock, can I point out something?” brother orthopod Thor Hammersley called out after looking at the imaging.  “Isn’t that an intramedullary screw, not a nail?”

“Damn it!” Brock exclaimed, disappointed in himself.  “I guess he needs to go back for a revision.  Stupid, Brock, stupid!”