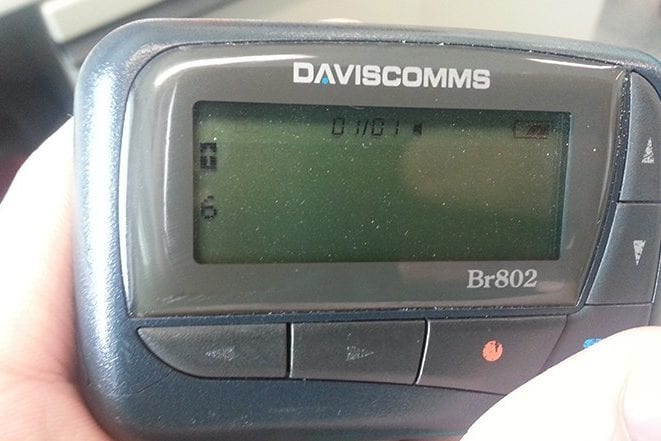 BOSTON, MA – In a breaking development, hospitalist James Dugan was paged at 7:45 AM this morning to the mysterious single callback number “6,” piquing his curiosity and interest.  Distracted and determined, Dugan temporarily suspended obligations to his patients and peers, and embarked on his quest to discover the ultimate meaning behind the number “6.”

“What can it mean?” asked Dugan in a philosophical manner, leaning back in a chair on Unit 4B.  “Six discharges?  Or perhaps six admissions?  Maybe one of my patients needs 6 mg of something.  Or 6 units.  Is that it?  What could it be?!”

Dugan spent the vast majority of his morning pacing up and down the halls of the hospital deep in thought, trying to elucidate the meaning of the number “6,” but this was to no avail.  Just before lunchtime, Dugan attacked and tore apart paper charts, only to find unsigned blood consents and DNR forms; no leads to “6.”  Dugan briefly considered that the number could be the meaning of life, but friend and colleague Dr. Doug Adams reminded Dugan that the answer to that question was “42,” not the number “6.”  He went back to the drawing board.

Dugan phoned in numerous consults, including calls to the ethics team and interpretive services, looking for any possible lead into the mystery of the single-digit callback.  Many have suggested to Dugan that the number “6” was merely a prematurely sent page with an incomplete callback number and that, most likely, the person who sent the page would page again.

“NONSENSE!” exclaimed an adamant Dugan, slamming his closed fist down onto his pager in disgust, crushing it into several pieces of useless plastic and an AA battery.  “I know when I’ve been sent an incomplete number.  When they send me a number with eight or nine digits instead of ten, that’s an incomplete number.  But this single number, I know it in my heart and my soul to be more than just an improperly dialed number.  Mark my words!”

Dugan experienced a numerical epiphany shortly after lunchtime, but was disappointed to learn that the number to the operator was “0.”

At approximately 2:15 PM, Dugan became increasingly frustrated and fidgety, still unclear and unsure what was the meaning of the number “6.”  He started to unravel, losing his composure, desperate to know what he wanted to know.

“TELL ME WHAT YOU KNOW ABOUT THE NUMBER SIX?!” demanded Dugan as he screamed into the ear of his 96-year-old demented female patient with altered mental status.  He grabbed her by the gown and pulled her face within a centimeter of his own.  “WHO SENT YOU?!  WHAT DO YOU KNOW?!  AND WHY ME?!  WHY HAVE YOU CHOSEN ME???!!!”  Dugan quickly exited the room, tired, exasperated, and on the verge of a meltdown.

Currently, Dugan is curled up into a ball, sucking his thumb and drowning in his own tears in the corner by the nurse’s station on Unit 6B.

No one has claimed responsibility for sending the inexplicable single-digit callback number “6.”  GomerBlog will continue to monitor the situation.  If you, the reader, can provide any clues or leads that may help solve this mystery for Dr. Dugan, please page GomerBlog to 7…