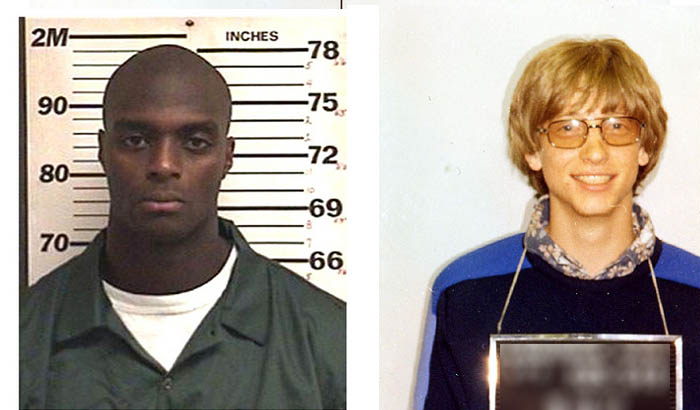 ST. LOUIS, MO – America’s most popular unsolved mystery, the mystery case of two individuals who team up to shoot, beat, and steal from many innocent Americans, has been solved.  These two criminals only known to authorities as “these two dudes (guys)” were caught on Friday from what we now know was an elaborate sting operation.

St. Louis Police Chief Mark Skalski held a press conference for this historic day.  “The city of St. Louis and the world can rest easy tonight,” Police Chief Skalski speaking in front of an applause-happy crowd stated.  “Northfield, Minnesota caught Jesse James and now St. Louis will be known for having caught these two dudes.” 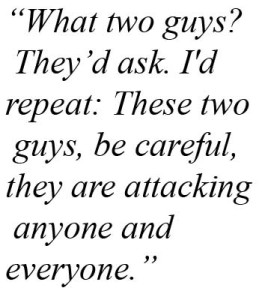 “We’ll get 2-3 attacks per night,” Dr. Trombaugh, an EM physician at Barnes-Jewish Hospital told reporters.  “I’d text my friend from residency [about the incident] and he’d say ‘These two dudes‘ attacked his patient in Kansas City that same night!”  He went on to think what sick-minded individual would attack otherwise innocent people, get in their car, drive 6 hours, and attack innocents again!

Police discovered a trend with the attacks.  The victim was typically minding his own business, and usually walks past bushes or hiding spots and then these two dudes can jump out for the attack.  The motivation is unclear but early estimates believe they are religiously motivated because most victims were reading their Bible.  Some attacks happen at their place of residence.  This leaves many people scared because anyone can be a target.

“I would call my family at home to make sure they were safe, sometimes multiple times,” Nurse Shannon stated.  “‘Look out for these two guys,’ I’d tell them.  ‘What two guys?’ they’d ask.  I’d repeat, ‘These two guys, they are dangerous.'”

“Honey, if they are right in front of you call the cops!”

“No, these two guys are on the loose!”

“Why did you let them get away?”

“I didn’t they, just attacked 4 different patients tonight, and they could strike again,” she warned her family.  “I am so relieved they caught these two guys, who happen to be these two dudes.”

An elaborate sting operation was conducted with an undercover agent walking the street at night carrying a Bible with his headphones on.  “The attacks usually involved only one victim,” explained Chief Skalski.  “Once we changed our strategy we caught the bastards in a matter of weeks.”

One officer who remains undercover told reporters, “It was very difficult to mind my own business.  I’d be walking and I would have to stop myself and say, No, my business.  I’d regroup and continue on.”

In these two dudes’ apartment they found maps all over the walls with push pins in every major city.  Each push-pin connected to another push-pin with a string of yarn.  “We found bats, chains, brass knuckles, guns, shot guns, you name it they had dozens of them,” Police Chief Skalski informed us.

Emergency rooms nationwide have reported the number of assault victims has plummeted to a near standstill.  Elated ER physicians have rejoiced with the precipitous drop in penetrating trauma.  The drop has shocked many, to the point that some surgeons are questioning their occupation.

“I really don’t know what to do,” reported a local Detroit trauma surgeon.  “I guess I can go back to doing appys for now, since I have not seen a single gunshot wound (GSW) since their arrest.”

However, despite thousands of circumstantial testimonies, Fredrick Douchemonger, a lawyer for the two dudes, seems optimistic.

“No one has been able to describe my clients.  Ever.  They claim my clients did such crimes, but just because no penetrating trauma has occurred since their arrest proves nothing,” Douchemonger stated.  “Without a single person being able to describe them, the prosecution has no case.  These guys pictured are not the infamous two dudes!”

With collaboration from Dr. Brandt MD.