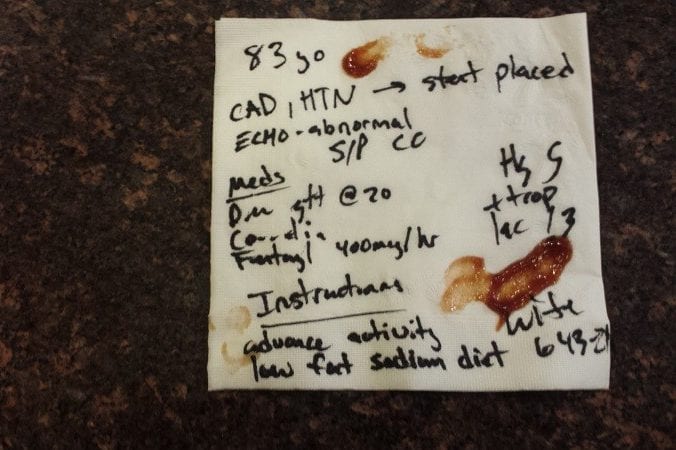 SALT LAKE CITY, UT – An 83-year-old man was transferred to the University Hospital Critical Care Unit from an outside hospital on Tuesday, with a small napkin describing relevant aspects of his 14-day course.

The ICU transfer, who arrived intubated, on ECMO, an intra-aortic balloon pump in place, and with a blood pressure of 56/39, reportedly has a past medical history notable only for “CAD, HTN.”  Also mentioned in the highly-detailed document were the results of his recent cath, which were apparently “stent placed,” and his echocardiogram, which was reportedly “abnormal.”

Fortunately, the outside hospital did include a list of active medications, including “gtt @ 20” and “?Coumadin.”

Pertinent lab values were also listed, notable for hemoglobin of either a 5 or 9, as well as a troponin of “+.”  An undated EKG, sketched on the back of the napkin, appears to show some sort of QRS complex.

Based on the large, recent surgical scar and wound VAC on his abdomen, the admitting team was able to deduce that “s/p co” may indicate the patient had a colectomy of some variety, for some indication.

The lone word “kidney” was written at the bottom, suggesting that the patient may have renal dysfunction, or perhaps was included simply to indicate that he has one or more kidneys.

Given his tenuous status, as may be indicated by what is either “lact 13” or “lact 1.3,” depending if the dot was BBQ sauce or ink.  The napkin also thoughtfully includes emergency contact info for his next of kin: “wife,” followed by a six-digit telephone number running off the napkin.

In addition to the this comprehensive hospital course were discharge instructions for the soon-to-be deceased man.  Written within the restaurant’s logo one can make out recommendations such as “advance activity as tolerated,” eat a “low-fat, sodium-controlled diet,” and “take all medications as directed” (presumably referring to fentanyl drip at 400 mcg/hour).

Also included was a 12-page document prepared by the paramedics during the 45-minute drive, including q5min vital signs, detailed drip titrations, ventilator settings, and a detailed physical exam.