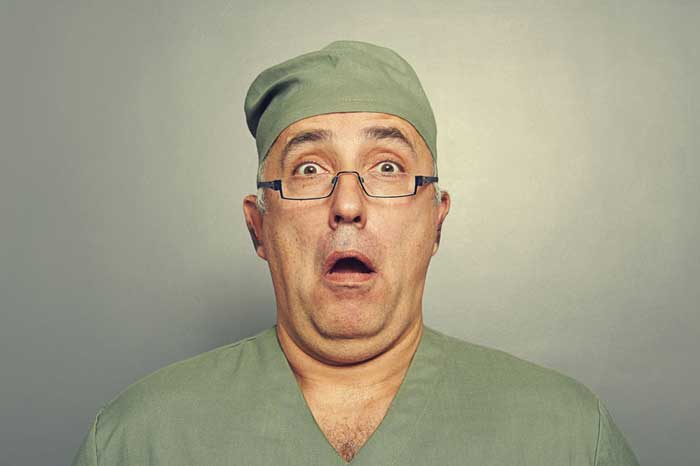 MOUNTAINDALE, OR – A general surgeon at Mountaindale Memorial was shocked to discover Tuesday night that he is not God, contrary to prior belief. 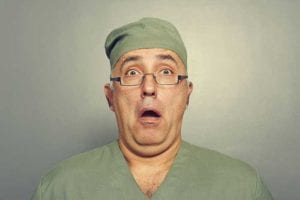 Dr. Chip Hackman received an unpleasant surprise during one of his emergency consultations for appendicitis.  The OR nurse reports that while Hackman was discussing the particulars of surgery with the patient, the patient commented, “Thank God I’ll be asleep for this!” to which Dr. Hackman replied, “You’re welcome.”

Both the patient and the nurse present began laughing and it took several minutes of intense questioning for Hackman to realize that the patient had been referring to some other God, who wasn’t even a surgeon.

“It was a huge shock,” said a tearful Hackman.  “It redefined my entire existence.  I don’t even know what’s real anymore.  How can someone worship a God who doesn’t even perform cholecystectomies?  That’s something they teach first-year residents!”

The patient in question, a Miss Ilia Seecal, was quite distraught by this turn of events.  “I didn’t mean any disrespect,” she said.  “I really need to watch my word choice more carefully.  He seemed like such a kind man.  Perhaps a bit misguided, but I didn’t realize it was such a sensitive subject.”

Surgeons around the world are sending their support, condolences, and opinions to Dr. Hackman, care of Mountaindale Memorial.  Dr. Myah Cardium of the Northern Heart Institute notes that the “rampant disrespect directed towards surgeons these days” is “downright scandalous.”  “No one respects surgeons like they used to,” said Dr. Cardium, in a recent exclusive interview.  “Patients need to remember their place!”

Following the realization that he is in fact not God, Dr. Hackman was so overwhelmed he had to cancel the surgery, resulting in a loss of net income severe enough to delay a new paint job on his second Mercedes by another week.  The remaining staff in the OR struggled to band together under Hackman’s PGY-4 resident and surgical assist, both of whom also had difficulty coming to terms with the realization that their favorite general surgeon was not God.

“It was devastating,” said the PGY-4, Gunter Gutman.  “The kind of thing you change careers over.  I always admired Dr. Hackman for his immortality and general in-susceptibility, but now I’m finding out that surgeons are just regular people…?  I’m not sure what to make of this.  It’s troubling, to say the least.”

The Mountaindale Memorial Surgical Department is having a department-wide day of mourning next Monday to pay respect to Dr. Hackman.  Observers are asked to wear black scrubs and bring their best radiology jokes because, if there’s one way to cheer up a sad surgeon, it’s cracking jokes at another department, preferably Radiology.