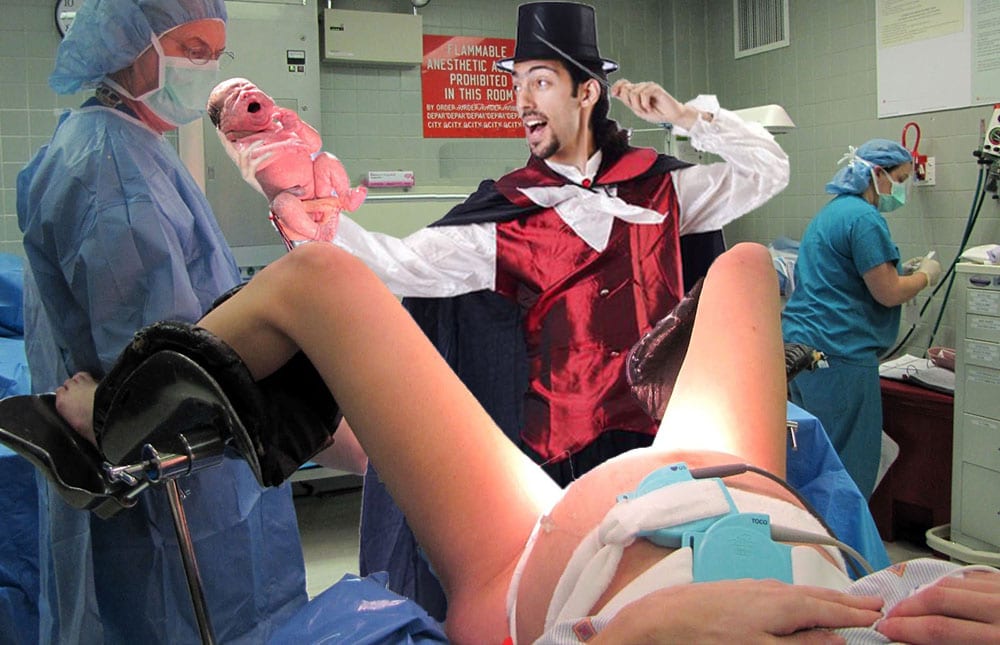 TARNIHONNOK, MD – Local OB/GYN or self proclaimed vagician, Dr. Fredrick Schmidt, refuses to wear traditional scrubs in the delivery room.  He’ll dim the lights, start the smoke machine, queue The Final Countdown, and then suddenly appears at the foot of the bed.

“Shallakazam!” he tells his 39-week G2P1 mother.  “For my next trick I will pull a baby out of your vagina!”

After he delivered her first baby, he said, “But wait, there’s more!!!”  To the room’s amazement and especially the patient, Kendall Simpson, the vagician delivered another baby.

“At first I was really surprised to have twins,” Kendall told reporters, “but when I thought about it two for the price of one, I’ll take it.  Dr. Schmidt is truly working magic over there!”

Critics argue he uses sleight of hand and distraction to deliver these babies, and it really isn’t “vagic.”  Dr. Schmidt, or “The Amazing Fredrick,” argues you just have to believe.  In Ms. Simpson’s case there is a rumor he read the ultrasound as only one baby just to set up for the big surprise on delivery day.

Kendall then said, “He asked me to think of a name.  He then cut the placenta and pulled a piece of paper out of it.  The nurse grabbed it and handed it to me.  It was OUR baby’s name!  UNBELIEVABLE!!!”  Some of the vagician’s tricks aren’t easily explained.

Whatever side you choose his impact is amazing.  “Giving birth is a magical time,” says Schmidt the Vagician.  “I just add a little pizzaz.”