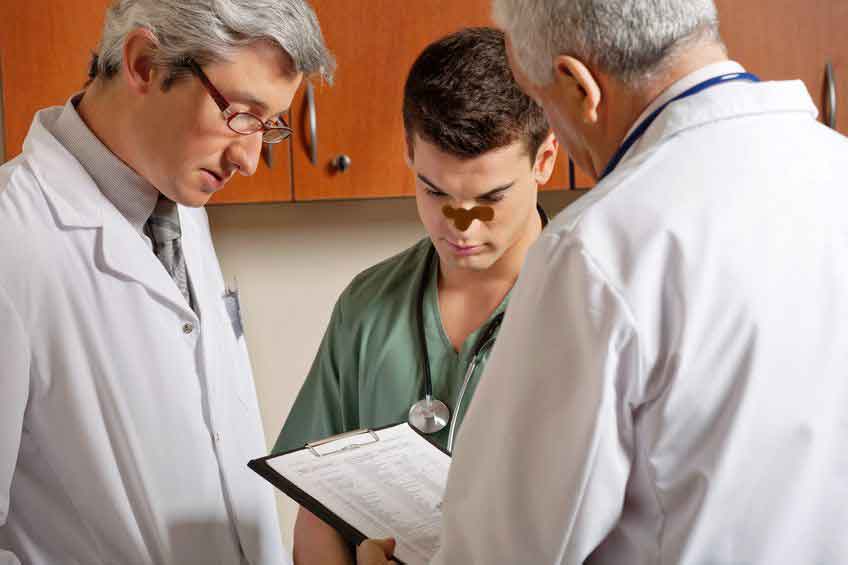 CHICAGO, IL – Despite the repeated warnings from numerous residents and attendings to alter the trajectory of his health and well-being, the brown nose of 26-year-old second-year University of Chicago medical student Alejandro Garcia has unfortunately metastasized to his liver and lungs.

“Alessandro’s nose was remarkably brown from the start,” said internal medicine attending Gina Harvey.  “Garcia made the comment that ‘he truly loves acid-base disorder‘ on day one of his medicine rotation, even though it was clearly a lie.  It never let up and pretty soon the brown spread across to his cheeks.”

“He had a malar brown nose,” corroborated fellow University of Chicago second-year medical student Kara Klein-Stephens.  “We told him that he needs to shut up and quit it, and give our attending’s butt a rest, but he wouldn’t have any of it.  He insisted he needed an honors on this rotation.”

During the month, the resident on the team, Jared Feuerstein, knew Garcia was on the wrong path when he kept giving daily presentations without prompting.  Topics included the brachial plexus, Krebs cycle, renal tubular acidosis, all the stuff that residents and attendings don’t know or care about, all in the name of sucking up.

Then yesterday, it happened: he started coughing up brown material and had a syncopal episode.  In the ED, a chest-X-ray and abdominal series noted multiple brown spots across his lungs and liver.  “It’s really unusual to see brown spots on a black and white X-ray,” said radiologist Amanda Barnes.  “That’s pathognomonic for metastatic brown nose disease.”

According to brown nose specialist and Garcia’s medicine program director Robert McMichael, metastatic brown nose disease can negatively affect a medical student’s reputation for the rest of his or her professional career, med school and beyond.  “Once a brown nose, always a brown nose,” said McMichael.  “When that brown starts hitting other end organs, that’s when you know: you’re a brown-nose for life.”