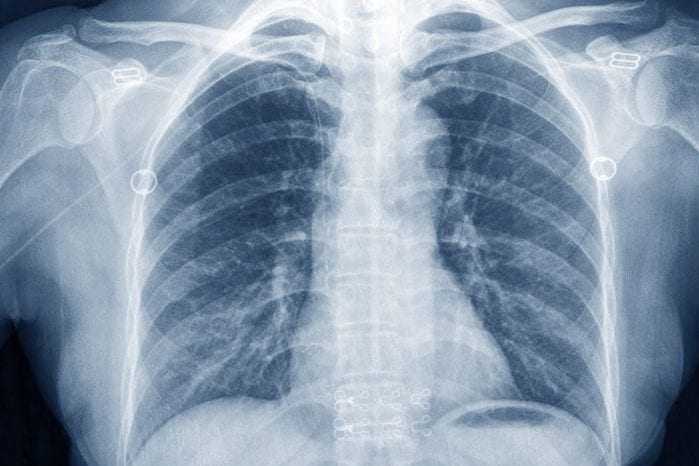 HOUSTON, TX – A hilarious error has made headlines in Texas recently, when a routine chest X-ray was dictated and reported to have an unprecedented diagnostic finding. This particular X-ray was taken to evaluate fluid overload status on a septic 54 year-old admitted to the ICU – the man was intubated and received aggressive diuresis to rid of his excess edema. When the radiologist appropriately noted the persistent Kerley B lines indicating need for continued or increased diuresis, he read it aloud into his dictation software, and without crucial attention to detail, the following was released into PACS:

The mistake has become a legend within the local hospital. The ICU group now refers to fluid overload as “Cardi B Syndrome.” Recently, surgeons have left ORs still wearing their shoe coverings, making tracks of bloody footprints in the hallways; when asked, one surgeon laughed and said, “Can’t you tell? These is red bottoms, these is bloody shoes!” Cafeterias and gift shops keep playing “I like It Like That” to the annoyance of most visitors (mainly because the local radio station keeps playing the song). Most publicly, the hospital’s CEO ended his most recent announcements email with “Okurrrrr” at the end of his signature.

The radiologist involved agreed to anonymous comment: “I mean, yeah, it’s embarrassing. Of course I didn’t read through my dictation, no one proofreads their notes anywhere in the hospital anyways. Above all, I blame the new autocorrect feature. Sometimes I catch it… once I caught where the dictation software mistook ‘IVC filter’ for ‘Heil Hitler,’ thank God I didn’t sign that report!”

Radiologists have since been thorough with their dictations to make sure no autocorrects make it into their reports on PACS. EPIC reports still have had other less famous but just as frustrating mistakes, including: “TPN” mistaken as “T-Pain,” “gastric lavage” mistaken as “Nicki Minaj,” and “alopecia” mistaken as “Bye Felicia.”