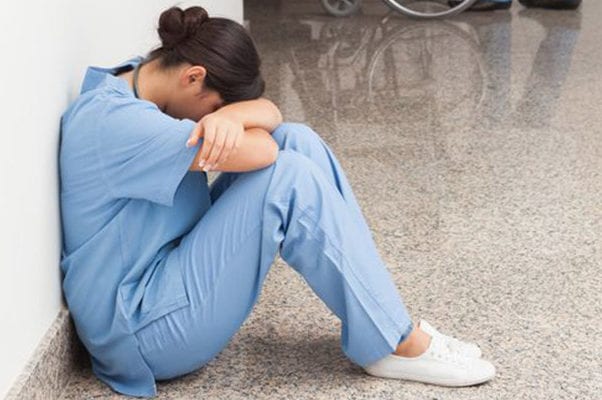 “It was her sixth straight 12-hour shift, and we all know that 12 hours is a best-case scenario especially around the holidays,” explained sympathetic social worker Jason Grimes, who helped with Weal’s home health arrangements. “Her patient load was unbearable, and they were all really sick. That stage 3 sacral decubitus ulcer from charting all day looks bad. Her feet are all swollen from running around all day. She was barely able to walk by the end of her last shift.”

Nurse Weal was evaluated by both PT and OT, who recommended subacute rehabilitation, but Weal respectfully declined and stated her preference to go home. Grimes helped Weal get set up with home health nursing, physical therapy (PT), occupational therapy (OT), an aide, and wound care. A rolling walker, 3-in-1 commode, and hospital bed have already been delivered.

“I understand that I could make a faster recovery at rehab, but it’s just not the same as being at home, I just really want to go home,” revealed Weal, who has spent her 15-minute break lying prostrate on the floor. She misses seeing the sun, but misses her bed even more. “If I could just get a little help at home, I think I might be alright.”

Weal did meet with Palliative Care. Palliative Care did not feel she met criteria for inpatient hospice just yet. Even if she did, Weal wasn’t ready to throw in the towel.

“I’m so tired, I don’t have the strength to lift a towel let alone throw one,” explained Weal, her fellow nurses helping turn her onto her back. She is still lying on the ground. All the lifting, shifting, and repositioning of patients has drained her; the fuel tank is empty. “I may not be going to hospice, but if anyone asks, I am a DNR.”