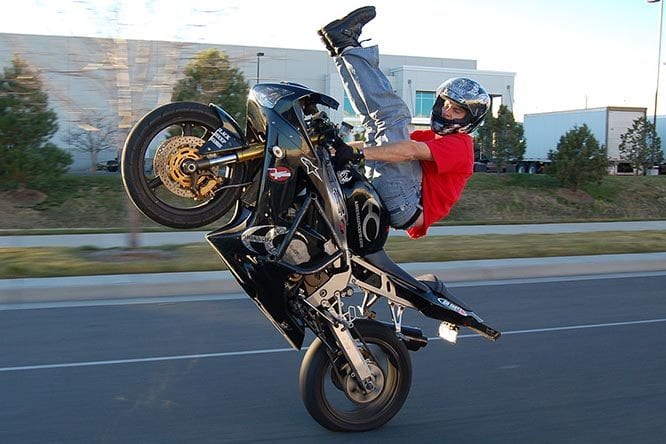 CALIFORNIA – Harris Jasper, a 3-year rider of a Kawasaki Ninja, or crotch rocket, told friends and family that this year would likely be the year he would donate “most of his vital organs to people in need.”

In addition to the fact that his hair “looks too good to be covered by a helmet most of the time,” he thinks that he has become more confident after having 3 years of riding under his belt without crashing seriously.  “I’m now ready to perform a 3-block wheelie while going upwards of 90 mph in residential areas.”

He told his family at a recent gathering, “A car could easily pull out from a side road because there would be no way they would suspect a guy on a motorcycle going 90… in a school zone… at night!”

Harris thinks his organs are as good as gone, especially considering his daily riding plans.  In addition to this future organ donor’s wheelies, he will consistently ride “two-to-three times the speed of traffic” while weaving in an out of cars as necessary to maintain “killer speeds.”

“You really can’t maintain riding habits like this for too long.  What keeps me going is knowing someday someone will really enjoy my liver and kidneys,” Harris explained.  “Let’s just hope the freeway traffic isn’t too bad that they can get to me soon enough to use my heart and lungs.”

“You know I have my whole life ahead of me,” said 22-year-old Jasper.  “Just in other peoples’ bodies.”