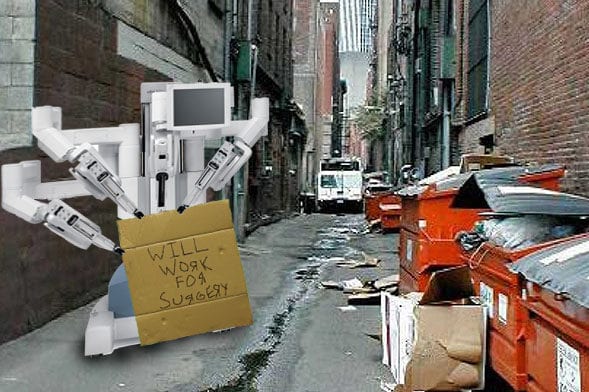 ATLANTA, GA – Sources close to GomerBlog report that a homeless da Vinci Robot was spotted on the northeast corner of West Peachtree & 10th Street begging passersby for any spare surgeries.

Several nurses and anesthesiologists offered to hang their white coats and stethoscopes on its arms, but the homeless da Vinci Robot resisted, mistaking their genuine concern for mockery.

“I used to do all kinds of surgeries: cardiac, colorectal, general, gynecologic, head and neck, thoracic, urologic…”  The da Vinci Robot’s speech was falling on deaf ears.  Other than prn gigs to make sandwiches or shovel snow, the homeless da Vinci robot was unemployed and covered in dust.  Numerous layers of dust.  “Now look at me.  Begging for spare surgeries.  Even a lap appy.”

Just then a hospital administrator walked by and looked at the pathetic da Vinci.  “I have $2 million,” he said.  “Besides, I really don’t want to spend it on health care providers and ancillary staff.”

“What do you wish me to do?” asked the rejuvenated da Vinci, dreaming of a transurethral resection of the prostate or a hemicolectomy, just like the good ole days.

“Hand out these patient satisfaction surveys,” the hospital administrator replied, then patted the da Vinci Robot on the back.  “Now this is money well spent.”