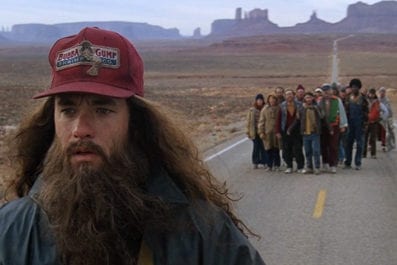 BIRMINGHAM, AL – Though it has been three decades since his historic three-and-a-half year cross-country run brought him national attention, Birmingham Medical Center (BMC) reports that Forrest Gump is still in rhabdomyolysis (or rhabdo) with a creatine kinase (CK) of 40,000 international units (IU) per liter (L).  A normal CK is usually less than 400.

“It happens,” confessed Gump, referring to either sh*t or rhabdomyolysis.  “What’s normal anyways?”  Before Gomerblog could tell him what was normal, he smiled and said, “Have a nice day!”

Gump started his run back in the early 1980s, stating that “I just felt like running.”  It should be noted that his love interest at the time, a woman named Jenny Curran, had said no when he asked her to marry him.  All he could think was Jenny saying, “Run, Forrest!  Run!”  So that’s what he did.

“Are we surprised by the elevated CK after all these years?  Well, yes and no,” admits Gump’s internal medicine physician Danielle Taylor.  “He ran straight for 3 years, 2 months, 14 days, and 16 hours.  I know for me I run one mile and I’m in rhabdo.  He ran back and forth across the entire United States.  You better believe he might still be sore.  All things considered, he’s doing pretty great.”

According to Taylor, Gump’s CK peaked in 1994 at greater than 160,000 IU/L.  The CK has slowly downward-trended since then but has never returned to normal.  Thankfully, Gump’s creatinine returned back to normal in 1996 and has remained at baseline ever since.  His urine remains nice and clear.

“I still remember when Gump came to my office over 30 years ago, he was complaining of muscle pain, weakness, and dark urine,” explained Taylor.  “He could barely hold up a ping-pong racket.  When I asked him what he thought it was, he simply smiled and said, ‘Life was like a box of chocolates, you never know what you’re gonna get.’  But when I got back the lab results, I told I knew what he got: rhabdo.  A real bad case of rhabdo.”

So how is Gump feeling right now?