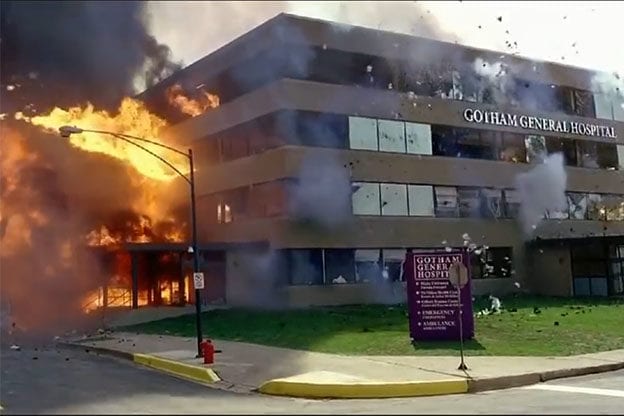 WASHINGTON, DC – In the wake of the infection by Ebola of Nurse Nina Pham, who had cared for the first victim of that virus in the United States, the Centers for Disease Control and Prevention (CDC) have released a modified policy for management of the disease in the hospital setting.  The simplified algorithm is designed to streamline patient management while optimizing disease containment, should an afflicted patient show up in the emergency room.  It features the arresting title “For the Love of God, Just Burn Everything.”

“If a patient is confirmed to be infected with the Ebola virus based upon blood testing,” begins the publication, “it will be important to adhere to the following steps very closely, as Ebola has demonstrated that standard transmission prevention measures are ineffective, and infection may occur despite standard protective gear.”

“First, gather everything that is not nailed to the floor, and toss it into a giant pile.  Second, douse that pile with gasoline and light it with a match.”

“The second step is the most important.  We repeat, BURN IT ALL.  Sheets, mattresses, curtains, ambulances, telephones, and anything else that was within 100 feet of the patient or his or her family members.”

“You should also burn the patient and his or her family members.  Sorry, that may sound harsh, but it’s the only way.  This disease is scaring the [expletive] out of us.”

Reaction to the policy has been swift and harsh.

“With respect to the CDC, the new policy is frankly impractical for the typical healthcare setting,” stated American Medical Association president Dr. Robert M. Wah.  “It just leaves too many questions unanswered.  How high, for example, should the conflagration be?  What will non-academic hospitals do for manpower without any interns or medical students to force into the hauling and igniting tasks?  Is tequila or perhaps vodka sufficient instead of gasoline?”

The policy does provide an extensive list of what should be burned, which includes all nearby gurneys, gowns, and patients, as well as glove boxes, wall art, floor tiles, and nursing assistants.  Recently graduated nurses and first- and second-year medicine residents who were on call that night should also be incinerated.  Third year and higher residents and senior nurses should be thrown into a pool of hydrogen peroxide and then “flash” steam sterilized in the OR.

“Look, we understand that these procedures may be onerous on hospital staff,” said CDC director Thomas R. Frieden.  “But Ebola makes your eyes bleed, and death is prolonged and agonizing as you literally drown in your own secretions.  Insane, right?  We just can’t think of any other way to be absolutely sure this nightmare isn’t going to get any worse.”

“That is why we require that those healthcare workers who do the burning must then themselves be burned.”

At press time, several area hospitals had reported they “weren’t going to take any chances” and had already been set on fire as a preventative measure.