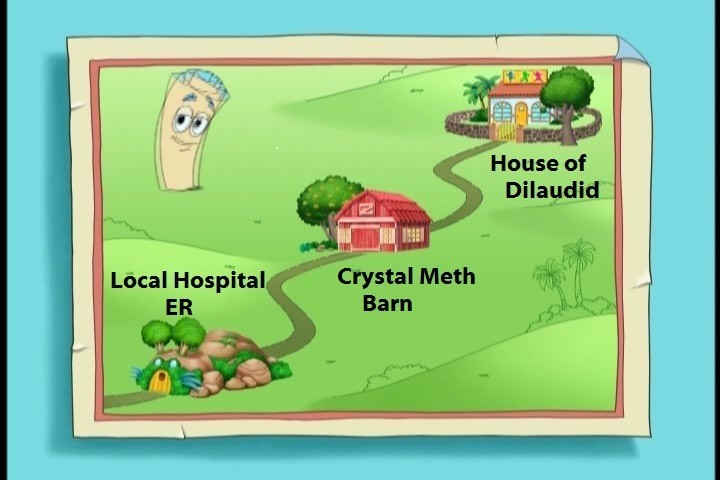 ORLANDO, FL – Children and health care practitioners worldwide are still reeling after the forced resignation of Doc McStuffins.  Though Disney’s spin-off Admin McBriefcase is set to debut soon, Nickelodeon has its sights set on winning over Disney fans with their new series Dora the Malingerer. 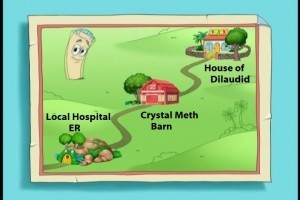 “Kids do grow up fast,” said Nickelodeon executive Cutie McDoiley.  “Dora just had a tweenage makeover, yes.  But she’s grown up even more now and faces her most difficult quest to date: battling a serious drug addiction.”

Dora the Malingerer is less passionate about her quests, unless they involve crack, cocaine, heroin, or crystal meth.  She still carries her purple backpack, which is mostly filled with pipes, used needles, shrooms, and an emergency stash of weed.  Boots, her faithful talking monkey friend, has taken a liking to booze, and is often inebriated and inappropriate.  “This is the first time at Nickelodeon where we’ve had to bleep out curse words,” said McDoiley.

Dora the Malingerer still interacts with her viewers.  In the pilot, she asks: “We need to go see a primary care doctor.  Where do we go first: a primary care doctor’s office or the ER?  The ER, right!”  In another episode, she asks: “My EF is only 5%, so which path should I take: the one lined with DNR forms or the one lined with ventilators and defibrillators?”  Sometimes her questions are just uncomfortable for the viewer: “Can I stay with you just one night?  I need a place to sleep and eat.  Please?!”

Swiper, the talking masked fox that attempts to steal others’ possessions, is also back for more.  More Dilaudid.  He, too, has a serious drug addiction.

Dora the Explorer fans will love the songs on Dora the Malingerer, which are more thought provoking than ever.  Song topics include drug overdose, pseudoseizures, unprotected sex and its consequences, being manipulative, and leaving against medical advice.

The “We did it!” song at the end of each Dora the Explorer episode is missing in Dora the Malingerer.  It will be replaced by health care practitioners singing a reprise entitled, “You’re discharged!”