CHICAGO, IL – In a study published in the latest issue of the New England Journal of Penmanship (NEJP), researchers have found that healthcare practitioners across the country have picked up their A game and, based on data from January 1 to July 1 of this year, are on pace to lose over 1 trillion working pens this calendar year.  This would be a 10% improvement compared to 2014. 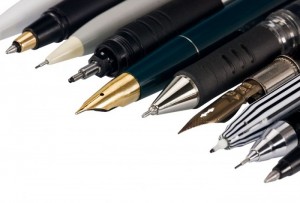 “Not to toot my own horn, but I’ve lost like ten pens this morning,” said anesthesiologist Christy Portillo of Rush University, as she pats her pockets up and down looking for another one.  “And that’s not even my personal best.”

“I thought I left it here…” said nurse practitioner John Acurio out loud, hovering over his work station with hands on his hips completely puzzled.  “Shoot.  I could’ve sworn… I’m sorry, I was looking for my pen.  You asked me a question, right?”

Other than managing paperwork and pain medications, a healthcare practitioner’s greatest skill involves the efficient, reliable, and precise loss of pens under any clinical circumstance, whether it’s forgetting a pen by the coffee machine, dropping it unknowingly into an open wound, or leaving it inside of a body cavity during an interventional procedure (in particular, colonoscopies and thoracic surgeries).  The best healthcare practitioners can lose pens even if they’re glued to their hands or sutured into place.  In 2014, 50% of pens were lost forever simply because a random person nearby asked, “Hey, do you mind if I borrow your pen?”

“It’s naive to think a borrowed pen will ever be returned,” explained former nurse Jason Hyatt, who quit due to the toxic attrition rate of blue, black, and retractable pens back in 2012.  “I have lost so many great pens over the years.  I couldn’t handle it anymore.”  Addison clarified later: “By ‘it,’ I mean, I couldn’t handle the stress of losing more pens.  I can handle a pen, multiple pens.  It’s not like I drop them or anything.  I’m not clumsy, I swear!”

The loss of pens is considered a rite of passage for any person in medicine.  Many do not consider their workday complete until they have lost at least one.  In the rare event healthcare practitioners makes it through a whole workday without losing a pen, they will often loan one out or throw one down a random hallway just so they can go home in peace.

Even Hippocrates, the Father of Medicine, acknowledged the importance of pens and their inevitable loss in his extended version of the Hippocratic Oath: “Whatsoever house I may enter, my visit shall be for the acquisition of pens and more pens since I shall lose them both left and right for reasons inexplicable…”  Scholars believe Hippocrates wrote his famous oath with the help of nine pens since the first eight were misplaced.

Many believe that the increasing costs of healthcare in the United States can be explained by the trillions of dollars spent on replacing pens alone, let alone costs associated with lost pencils, Sharpies, and crayons.  Zero working pens have been recovered in 2015 and are assumed to exist somewhere near Narnia.  Interestingly, 50 million broken, inkless, or exploded pens with broken caps have been spotted in hospital and clinic drawers so far this year.

“We are so proud of healthcare professionals,” said Tammy Belmont of PaperMate, speaking on behalf of pen companies worldwide.  “Thanks to their work, our penmakers remain employed and our companies will continue to thrive for years and years to come.”

Fourteen pens were borrowed and never returned during the writing of this article.