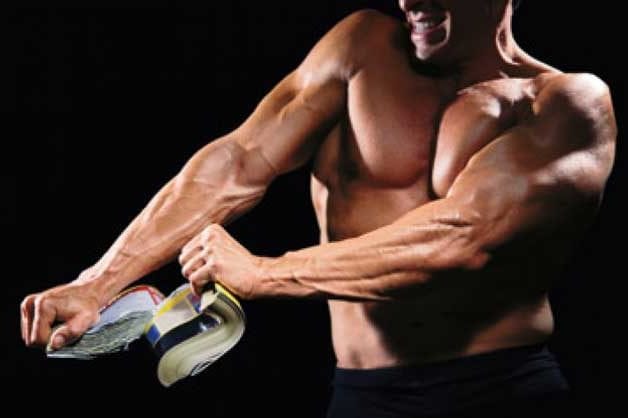 LOS ANGELES, CA – “How can it be??!!” wondered orthopedic surgeon Thor Hammersley, scratching his noggin with his oversized mitts.  “Thor don’t understand!”  You see, Hammersley has just spotted a true anomaly walking the floors of his hospital: an internist with bigger biceps than he.  Gomerblog is the first to break the story.

“They’re not even flexed!  They’re bigger than mine or any orthopod!” continued Hammersley, staring at internist Vincent Jones, who is unusually ripped “for a Medicine dude,” at least to Hammersley anyway.  Hammersley is at a loss for words, which probably explains why his progress notes contain unintelligible shapes.  “But… but… but….”

Jones saw Hammersley staring.  Jones smiled before grabbing a nearby phonebook and tearing it in two.  It’s still unclear what that phonebook was doing there in the first place.

Hammersley had to sit down.  He was visibly shaking his head from side to side in disbelief.  “Brah, how can those pythons get so huge?  He must do tons of chest compressions.  Or is he curling stethoscopes?  Can you build muscle with such a wimpy instrument?!”  He added later: “Thor don’t understand!”

Hammersley texted a picture of Jones’ jacked biceps to his good friend and fellow orthopod Timothy Billroy.  Billroy is best known for his small arms, earning him both the nickname Tiny Arms Tim and a pediatric fellowship.  “Medicine dude has GUNS, brah, makes ME feel bad, can’t imagine how YOU feel!!!” Hammersley wrote to Billroy.  After a prolonged pause, Billroy replied with a cry-face emoji.

Has the balance of power shifted in the relationship between Medicine or Ortho?  Maybe.

Then again, maybe not.  Gomerblog has learned that Thor’s brother, fellow orthopod Brock Hammersley, had just diagnosed a patient with atrial fibrillation with rapid ventricular response on an ECG he interpreted by himself, then subsequently and successfully rate-controlled him with a diltiazem gtt, causing nearby internists’ brains to explode.  More to follow.