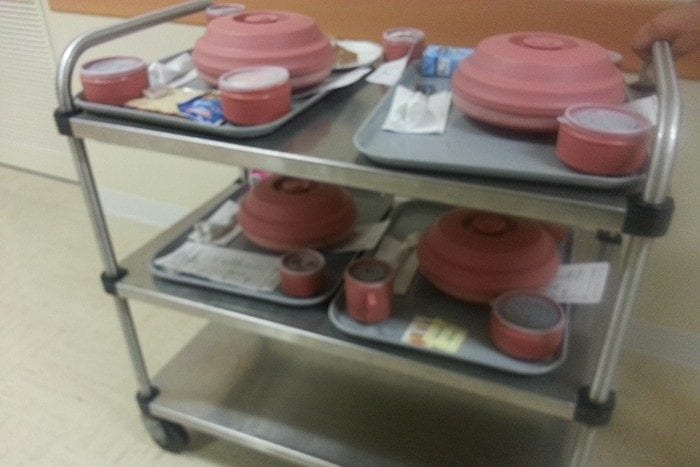 GALVESTON, TX – Charles Wilson is a typical pulmonary/critical care fellow who spends 130 hours a week at the hospital (officially 80), which totals $6.10 an hour.  For GomerBlog to find out that he is stretching every dollar, wasn’t surprising.

“Out of the question,” Charles responded when asked about stopping his data plan.  “What am I going to do on rounds?  They take so long and can be so boring, especially when the medical students present.”

Charles was describing “rounds,” when his intensive care unit (ICU) team walks from room to room talking about patients, and medical students can talk about many details not essential to a patient’s care.  Did the patient prefer ham or beef; the medical student would know and describe a life history as if they were Chunk in Goonies.

Looking for ways to save money, Dr. Wilson found a creative way to save his iPhone 5s’ data plan from cancellation.

For two years Dr. Wilson has been able to cut costs by ordering three meals a day on ventilated patients.  He came across the idea one day on rounds when he had to go to the bathroom; the only male bathroom in the ICU was occupied so he went into a comatose patient’s room to use theirs.

“No way was I going to run down the hall as I was playing turtle-head,” Dr. Wilson told reporters.  While walking to the patient’s unused throne, he saw a food tray.  This mana from the gods, or hospital food tray to the common eye, was accidentally delivered to this room, but Dr. Wilson believes it was fate.  “My bathroom misfortune turned into a financial opportunity.  Goodbye tube feed, saltine, small-canned Shasta drinks, and ketchup diet; hello cornucopia of delicious free food!”  He then ate the food and snuck the tray into a cafeteria cart in the ICU.

“Last June I went a week without eating, but along came July and I was back in business,” referring to the low census in June and the large number of ICU patients that return in July. Dr. Wilson, over 2 years and counting, continues to eat for free without anyone being the wiser.

When the ICU was very busy last April he invited his family of 4 to come to the hospital and join him, and all ate for free huddled behind several broken ventilators and gurneys.  Charles’ gravy-train continues to chug along.  Sources say that he will continue to order intubated patients food, even when he finishes training.