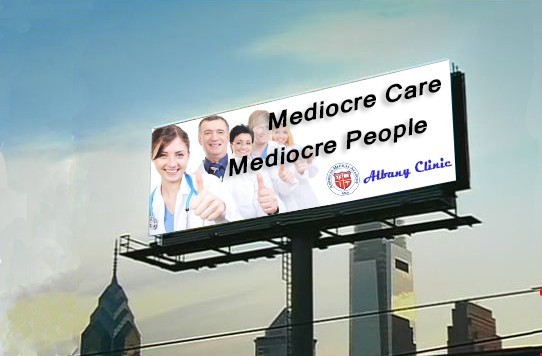 NEW YORK, NY – Forget the days of the compassionate and uplifting slogans like “A Passion for Healing,” “Because Your Life Matters,” or “Every Day, a New Discovery.”  With record numbers of nurses and doctors burning out and hospitals busting at the seams with sicker and sicker patients, hospitals are waving their white flags and this is being reflected in new, brutally-honest slogans to deter patients from seeking care.

The first hospital to make the change is New York Medical Center, who earlier this month changed their decades-old slogan of “Advanced Medicine, Trusted Care” to “Death is Inevitable.” 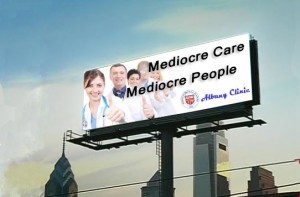 Other New York hospitals were quick to follow suit, calling the move “brilliant” and “revolutionary.”

New York City General has voted to change its new slogan to “World-Class Healthcare, But Not Here.”  Rochester Hospital hopes to cut to the chase completely, having narrowed down their new slogan to one of two possibilities: “Always Capped” or “Quantity, Not Quality.”

“We really have no choice,” said CEO Michael Winters at Baltimore Medical Center after a 25-second full-body yawn.  “This is what American healthcare has become.  Everyone’s tired.  We’re all so tired.  We all need a break.”

Like Baltimore Medical Center, many new slogans appearing in the Baltimore and Washington, D.C. areas are reflecting fatigue.  New slogans include: “A Union of Indifference and Lazy,” “Compassion, Innovation, Etcetera,” and “We Encourage Nap Time.”

In the Southeast, new hospital slogans are financially motivated.  Atlanta Healthcare proudly advertises their theme “Close to Home, Close to Your Wallet,” while Miami Health Systems has no shame, proclaiming “Struggling to Stay Afloat.”  Other notable slogans in the Southeast include “Where Billing Comes First” and “Cha-ching!”  Birmingham Medical Center took it to the extreme last week by removing their slogan completely and replacing it with the following: “$$$$$$$$.”

In the Midwest, slogans show a little more frustration.  Determined to thwart drug-seeking patients, Chicago Clinic has dropped “A Passion for Putting Patients First” for a more blunt “We’re Out of Dilaudid.”  Milwaukee Medical Clinics adopted a similar tagline, stating more broadly, “We’re Out of Narcotics.”  Both hospitals have noted at least a 400% decrease in emergency room and admission volumes since implementation of the new slogans.

The West Coast is joining the movement too.  Yesterday, California Healthcare’s previous slogan of “We’re in This Together” has been edited and now reads “We’re in This Together, LOL.”  Other hospitals in California, Oregon, and Washington are expected to follow, with sources close to GomerBlog suggesting that one Oregon hospital plans to use “WTF” in its slogan while another Washington hospital plans to “shake things up” by dropping an F bomb.

“This is an important moment in our country’s history,” said President Obama at the White House, with both Democrats and Republicans united in support behind him.  “This is outside-the-box thinking at its finest.  What better way to decrease health care costs than by decreasing health care access and decreasing patient care across the board.”

The President does have a favorite tagline.

“Come on, guys,” said President Obama with a smile.  “You know Chicago’s my hometown.  The Chicago Clinic’s ‘We’re Out of Dilaudid,’ without a doubt.  It’s music to my ears.”