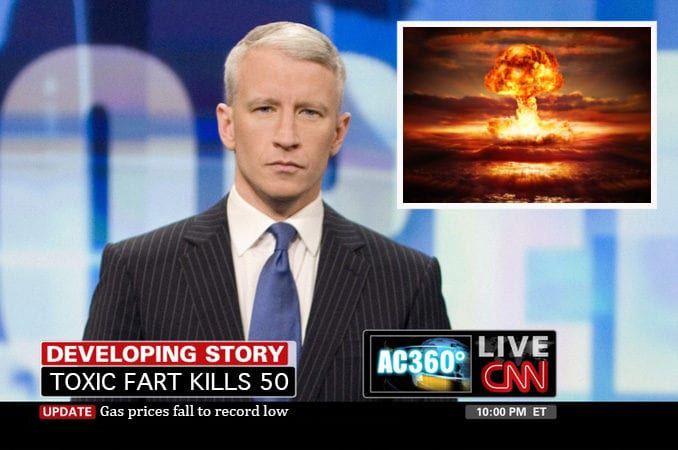 ATLANTA, GA – In unsettling news from Atlanta University Hospital today, patient Timothy Flatus unleashed a fart at 9:45 PM last night so powerful and so toxic that it sent every man, woman, and child fleeing for their lives.  Unfortunately, the “Fart of the Century” claimed the lives of 50 people.  As of this morning, 230 people are unaccounted for and considered missing. 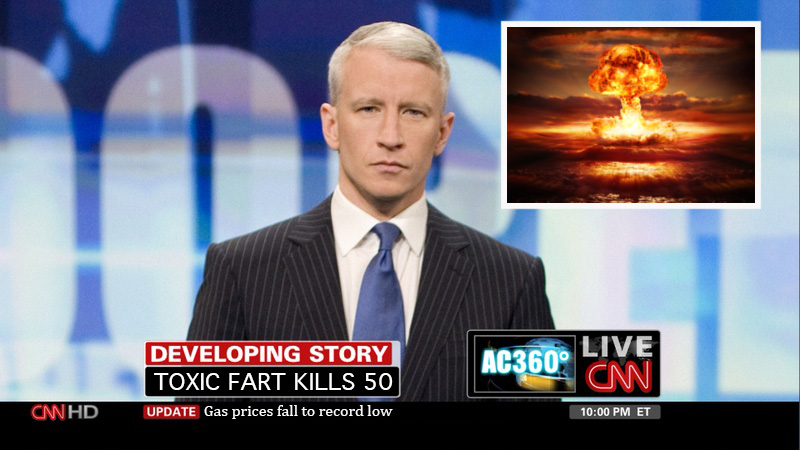 “What did it smell like?” asked dazed nurse and survivor Ann Rogers.  “One-quarter C. diff, one-quarter purulent decubitus ulcer, one-quarter melena, and one-quarter PURE EVIL.”  Rogers added later, after hacking up a lung: “It was the fart of the devil.”

According to eyewitnesses, the passing of gas was “booming,” like a “thunderstorm” signaling the “end of the world as we know it.”  The force imparted by the satanic fart was powerful enough to cause blindness and “burn away one’s skin.”  The horrendous odor induced crippling nausea, vomiting, chest pain, shortness of breath, seizures, urinary incontinence, and depression.  The 50 people who perished in the nuclear fart were within 50 feet.  They were burned to a smelly crisp.

Atlanta University Hospital sustained significant structural damage as well.  A hospital wing was nearly obliterated by the force of flatulence (FoF), while 80% of the remaining hospital’s walls, floors, and ceilings were covered in a loose, brown, guaiac-negative coating of stool.  Total damages are estimated to be in the tens of millions.  A C. diff toxin is pending.

Just an hour ago, under the guidance of the Centers for Disease Control & Prevention (CDC), four helicopters delivered a hospital-sized contact precaution gown and draped it over the hospital.  Atlanta University Hospital is requesting donations of Febreze and Lysol.  Survivors were evacuated to nearby hospitals where they are undergoing decontamination and hyperbaric oxygen therapy.

Atlanta University Hospital has hired seismologists to help predict when gaseous patients unleash “the next big one.”  Health care practitioners have been advised to wear Hazmat suits until further notice.  No one is taking any chances.

“You have to be prepared for the fart to end all farts,” said CDC spokesperson Ty Johnson, kneeling down in prayer.  “Sh*t happens.”