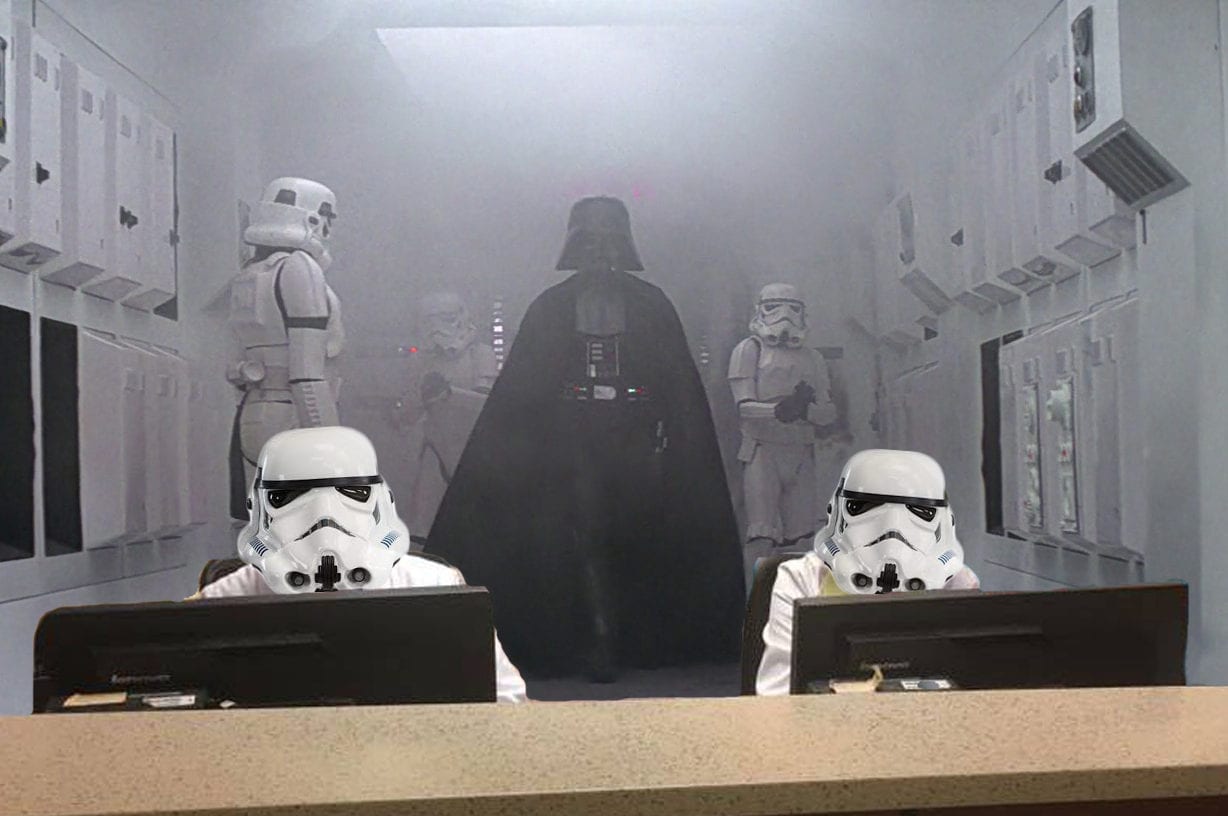 MED-SURG UNIT, DEATH STAR MEDICAL CENTER, DEATH STAR – We have received word from the Rebel Alliance that Darth Vader has been distracted and displeased by the woeful readmission and length-of-stay metrics reported at last month’s staff meeting.  Gomerblog has confirmed Death Star hospitalists’ worst fears: Darth Vader is on the floors seeking answers.

“Where are the discharge summaries?!” Vader demanded of first-year hospitalist and recent Galactic Empire internal residency graduate Raj Tewani, flanked by administrators in black suits and stormtrooper helmets.  “Where are the summaries?!”

“I’m sorry, Lord Vader,” Tewani begged, suffocating from Vader’s use of the Force to constrict his airway, “I… will… get them done… tonight.”

“I hope so for your sake,” Vader responded, releasing his grip.  “The Emperor is not as forgiving as I am.”  The Emperor to which Vader is referring is Death Star CEO Chaz Moneybags.

Senior hospitalist Ethan Ryan thought he was a goner as Vader physically picked up him up by the neck, an unfortunate scenario for a hospitalist who had recent cervical fusion surgery.

“I find your lack of quality disturbing,” Vader uttered ominously, before dropping Ryan to the floor in a heap of nervous perspiration.  “Who discharges a stroke patient home without an aspirin?”  His life was spared for now.

Vader is a perfectionist and demands the best from his Death Star medical staff.

“Not many people realize that when Darth Vader chokes out someone who has wronged him, their trachea is messed up for good and makes placing an endotracheal tube damned near impossible,” Death Star critical care fellow Lana Donelson told Gomerblog.  She has yet to save anyone with Vader-induced airway trauma.  “In fact, I’ve made myself a DNR/DNI to prepare for that inevitability I upset him.”

Next Vader had his sights on hospitalist Jason Johnson, whose bounce back rate holds steady at 100% and has a current backlog of 293 yet-to-be completed discharge summaries.  Vader and the Galactic Empire had enough.

“You’ve failed me for the last time, doctor,” Vader barked at Johnson, before escorting him to a private room to have a “one-on-one feedback session.”  Medical staff turned away, as they knew what this really meant.

In related news, a daytime hospitalist position has just opened up at Death Star Medical Center.  Vader has asked any interested applicants to email their CVs to [email protected]  Jedis need not apply.