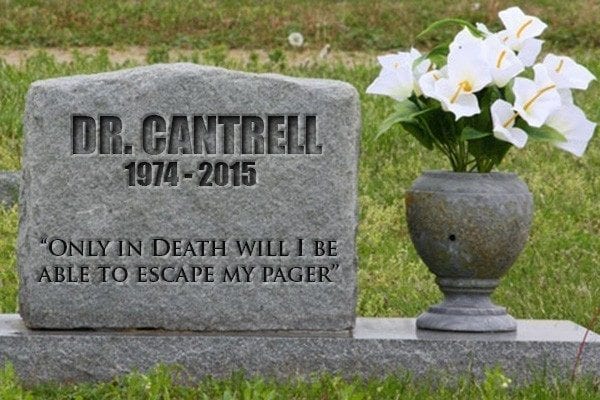 NEW YORK, NY – New York Medical Center (NYMC) is in mourning as they learned of the death of beloved internal medicine physician Amy Cantrell.  Cantrell, who is a well-known and highly-respected clinician and teacher, suffered an untimely and gruesome death after getting hammered with an inordinate number of pages during her workday yesterday.  She was 41 years old. 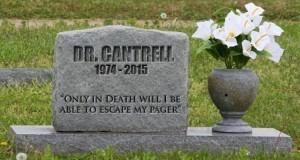 “I knew something was wrong when Amy’s pager went off 10 times between 7 AM and 7:05 AM,” said general surgeon and friend Jonathan Weiss, who sat next to Cantrell yesterday morning.  “Right from the start she was running around like a chicken with its head cut off.  Should’ve known headless chickens die eventually.”

Cantrell was observed running from phone to phone, trying to catch up on pages.  One nurse noticed that “for every one page she answered, she received another six.”  Cantrell was so inundated with pages that by lunchtime – Cantrell never had a chance to eat lunch by the way – she actually hadn’t seen a single patient.  She was prisoner to her pager.

“The truth about the pager is that each page is about another thing to add to the To Do list,” said fellow internist Jamie Walker.  “But that same page interrupts a physician’s ability to carry out the previous task.  So what happens?  Tons to do, but no way to do it because you’re getting paged all the time.”  Walker’s pager goes off.  “F**K!  NOW WHAT?!?”

Yesterday, the first page relating to a patient’s narcotic request gave Cantrell a headache; the fiftieth one caused a hemorrhagic stroke.  The first page about constipation due to narcotics gave her substernal chest pain; the hundredth one caused an ST-elevation MI (STEMI) with peak troponin of 45.86.  Constant pages from utilization review regarding each patient’s admission status made her tremendously nauseous; the thousandth one led to a perforated duodenal ulcer with massive hematemesis.  Though colleagues encouraged Cantrell to seek medical attention, hospital administrators were quick to remind her that she wasn’t working hard enough and that she really needed to pick up the pace since “you have some patient satisfaction surveys riding on this.”

The 887th page was what finally claimed the life of Cantrell at 2:37 PM.  It was yet another incomplete callback number.  Though Cantrell died in a puddle of her own blood, sweat, and tears (mostly tears) for all to see, she would be paged and overhead paged for the next 10 hours anyway.

“I don’t care if she died,” said NYMC administrator Steven Doucheface, stressed about a small ketchup stain on his $1000 suit.  “She still has a job to do.”

Pager-related deaths are a sad reality of modern-day medicine.  There are numerous forms of pager-related deaths, but all are ultimately tied to the malignant pager, whether it’s in the form of cranial explosion, full-body implosion, torsades, rectal bleeding, or physician failure to thrive.  It’s not uncommon for physicians on the brink of pager-induced decompensation to turn off their pagers, walk away from their pagers, hurl them at the ground at breakneck speed, or melt them in microwaves or autoclaves, all in the name of self-preservation.

“Amy was one of the best,” said Weiss, while his pager constantly buzzed during his eulogy to his departed colleague and friend.  “For the love of… why won’t they stop freaking paging me??!!”  Weiss hurled his pager out the window.